Johnson & Johnson Vaccine Deliveries Are About to Take Big Dip in U.S.

Here’s what you need to know: People lined up for the Johnson & Johnson vaccine at a college in Los Angeles on Wednesday.Credit...Richard Vogel/Associated Press Johnson & Johnson will allocate 86 percent fewer doses across the United States next week than are currently being allocated, according to data provided by the Centers for Disease Control and Prevention, just as the national vaccination campaign has found its footing. The distribution of the single-shot vaccine has been inconsistent since Johnson & Johnson delivered its first batch at the beginning of March, sending 2.8 million doses across the country before dipping below 400,000 in the following weeks. Last week, about 1.9 million doses were sent across the country. This week 4.9 million shots went out. But next week that number will drop to just 700,000. Federal administrators divide vaccine doses nationwide based on each state’s adult population. That means, California will bear the brunt of the reduction: After receiving 572,700 doses of the Johnson & Johnson vaccine this week, it will only get only 67,600 next week. In Texas, the allocation will drop to 46,300 from 392,100; Florida, which received 313,200 shots this week, will get only 37,000 next week. Guam, which received 16,900 doses this week, will receive none next week. The slowdown comes days after federal officials learned that Emergent BioSolutions, a contract manufacturer that has been making both the Johnson & Johnson and the AstraZeneca vaccines, mixed up ingredients from the two, ruining up to 15 million doses of the Johnson & Johnson vaccine. That mix-up led regulators to delay authorization of the plant’s production lines and the Biden administration to put Johnson & Johnson in charge of the troubled Baltimore plant. How big a role the problems at the Baltimore factory are playing in the fluctuations in the Johnson & Johnson vaccine distribution is still difficult to determine. Conservative about how many doses it would produce at first, Johnson & Johnson still fell behind this winter on its production goals in the U.S., delivering less than it had promised in February and March. The initial Johnson & Johnson vaccine supply allocated in the United States came from a Dutch plant, and it was delivered on an uneven schedule. That led the Biden administration to warn state health officials that the supply of the vaccine would be variable. But federal officials expected that with the help of the Emergent factory in Baltimore, there would be a steady stream of doses from the company in April. Now, with that plant still lacking authorization, the anticipated delivery schedule of the vaccine is up in the air. In Maryland, the state health secretary, Dennis R. Schrader, told vaccine providers that the “significant decrease with no advance notice is a surprise and a disappointment, and we share your frustration.” The state will receive 78,300 less shots next week compared with this week. In Ohio, speaking at his weekly news conference, Gov. Mike DeWine said he had been told that the reduction in doses was not a result of “what happened in the factory.” Ohio is to receive 151,600 fewer shots next week. The C.D.C. said on Thursday that about 112 million people in the United States had received at least one dose of a vaccine, including about 66.2 million people who have been fully vaccinated by Johnson & Johnson’s single-dose vaccine or the two-dose series made by Pfizer-BioNTech and Moderna. United States › United StatesOn April 7 14-day change New cases 73,200 +14% New deaths 2,564* –31% *Includes many deaths from unspecified days World › WorldOn April 7 14-day change New cases 668,391 +16% New deaths 14,575 +12% U.S. vaccinations › Fully vaccinated20% At least one dose34% Other trackers: A worker disinfected a table at a restaurant in Westbury, N.Y., last year. Credit...Hiroko Masuike/The New York Times When the coronavirus began to spread in the United States last spring, many experts warned of the danger posed by surfaces. Researchers reported that the virus could survive for days on plastic or stainless steel, and the Centers for Disease Control and Prevention advised that if someone touched one of these contaminated surfaces — and then touched their eyes, nose or mouth — they could become infected. Americans responded in kind, wiping down groceries, quarantining mail and clearing drugstore shelves of Clorox wipes. Facebook closed two of its offices for a “deep cleaning.” New York’s Metropolitan Transportation Authority began disinfecting subway cars every night. But the era of “hygiene theater” may have come to an unofficial end this week, when the C.D.C. updated its surface cleaning guidelines and noted that the risk of contracting the virus from touching a contaminated surface was less than 1 in 10,000. “People can be affected with the virus that causes Covid-19 through contact with contaminat 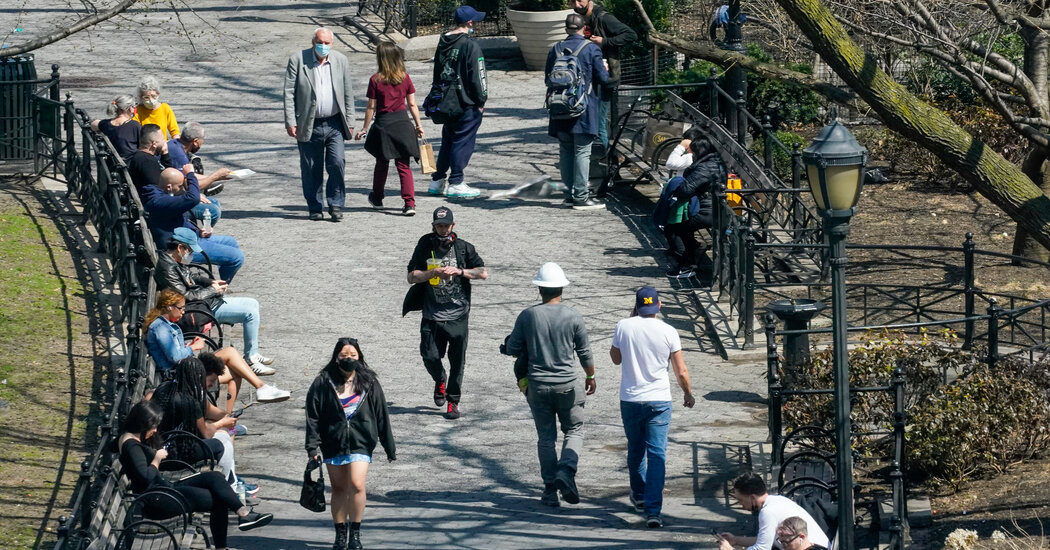 Alaska Becomes First State to Open Vaccine Access to Everyone...

Can the World Learn From South Africa’s Vaccine Trials?

In a year that has seesawed between astonishing gains and brutal setbacks on Covid-19,...

India, which has shipped Made In India’ Covid-19 vaccines to around 25 nations,...

Was it worth it? After two decades of midnight watches and gut-twisting patrols...

How Pro-Trump Forces Pushed a Lie About Antifa at the Capitol...

Ms. Ingraham, who told Fox News viewers about “antifa sympathizers” at the riot,...

This New Covid Vaccine Could Bring Hope to the Unvaccinated...

In early 2020, dozens of scientific teams scrambled to make a vaccine for Covid-19....

Key Moments on Day 11 of the Derek Chauvin Trial

He said he believed Mr. Floyd would have lived, had he been given treatment during...

BIRCH CREEK, Alaska — As the turboprop plane rumbled to a halt at the edge of a...

In August 2017, Mr. Sessions, as the attorney general, condemned the “dramatic growth...

What We Know About the Mexico City Train Crash