Here’s what you need to know: If Republican senators are united in opposition to President Biden’s stimulus bill, the chamber’s Democrats will need to be united in order to pass it.Credit...Doug Mills/The New York Times President Biden agreed on Wednesday to place stricter income limits on the next round of stimulus payments, making the latest in a series of crucial concessions to moderates as Democrats worked to hold their fragile coalition together to push his $1.9 trillion pandemic aid package through a divided Senate. The decision to scale back the direct checks — a popular centerpiece of Mr. Biden’s economic relief initiative — was the second time in a week that Democrats had moved to curtail the sweeping stimulus plan by limiting or removing progressive priorities. The moves have underscored the narrow path Mr. Biden must navigate as he seeks to steer his first major legislative initiative through the 50-50 Senate, where he cannot afford to lose a single Democrat in the face of what is likely to be united Republican opposition. The legislation, which Democrats hope to push through the Senate by the weekend, remains among the largest federal relief packages in modern American history. It would deliver hundreds of billions of dollars for vaccine distribution, hospitals, state and local governments and families struggling to recover from the economic toll of the coronavirus pandemic. “We cannot go through the situation we did back in 2009, where the stimulus wasn’t strong enough and we stayed in recession for years,” Senator Chuck Schumer of New York, the majority leader, said on Wednesday. The legislation, he added, “will be the single largest anti-poverty bill in recent history.” But in recent days, it has narrowed to accommodate the moderates’ concerns as well as the arcane rules of the Senate. Under the new proposal blessed by Mr. Biden, individuals earning more than $80,000 and households with incomes exceeding $160,000 would be disqualified from receiving stimulus checks. The caps are $20,000 lower than they were in the last round, wiping out payments for millions of Americans. The plan would send $1,400 checks to individuals earning up to $75,000, single parents with children earning $112,500 and couples making $150,000, with the amount gradually falling for people with larger incomes. The payment would disappear altogether for those over the cap of $80,0000 for individuals, $120,000 for single parents and $160,000 for couples. Mr. Biden’s original proposal, which passed the House over the weekend, would have set the cap at $100,000 for individuals, $150,000 for single parents and $200,000 for couples. The reduction was another blow to liberal Democrats, who are already angry over a decision last week to remove a minimum-wage increase from the stimulus plan. A top Senate official ruled that measure out of bounds under the rules governing the legislation, but it also lacked support from crucial moderates whose votes would have been needed to pass it. Democratic leaders had hoped to begin debate on the legislation as early as Wednesday, but their timeline was slipping, and Republicans promised to further slow the process. Senator Ron Johnson, Republican of Wisconsin, said he planned to force a full reading of the legislation on the Senate floor — an hourslong process undertaken by journal clerks, not senators — and offer a slew of amendments to prolong what was already expected to be a marathon voting session, known as a vote-a-rama, of rapid-fire attempts to modify the bill. “We need to keep this process going so we can highlight the abuse — obviously not Covid relief, obviously a boondoggle for Democrats,” Mr. Johnson told a Wisconsin radio station. Listen to ‘The Daily’: The $1.9 Trillion Stimulus Plan As the U.S. Senate prepares to vote on President Biden’s first major piece of legislation, we look at the partisan debate that has erupted around it. transcript Back to The Daily bars 0:00/24:52 -24:52 transcript Listen to ‘The Daily’: The $1.9 Trillion Stimulus Plan Hosted by Michael Barbaro; produced by Stella Tan and Daniel Guillemette; edited by M.J. Davis Lin and Lisa Chow; and engineered by Corey Schreppel. As the U.S. Senate prepares to vote on President Biden’s first major piece of legislation, we look at the partisan debate that has erupted around it. michael barbaro From “The New York Times,” I’m Michael Barbaro. This is “The Daily.” [music] Over the weekend, the House of Representatives passed President Biden’s first major piece of legislation, a massive stimulus package designed to end the pandemic and rescue the economy. Today: As the package moves to the Senate, I spoke with my colleague, Jim Tankersley, about what’s actually in it and the partisan debate that has erupted over its size and ambition. It’s Tuesday, March 2. Hey, Jim. jim tankersley Sir. How are you? michael barbaro I’m well. Congratulations on your new assignment to the White 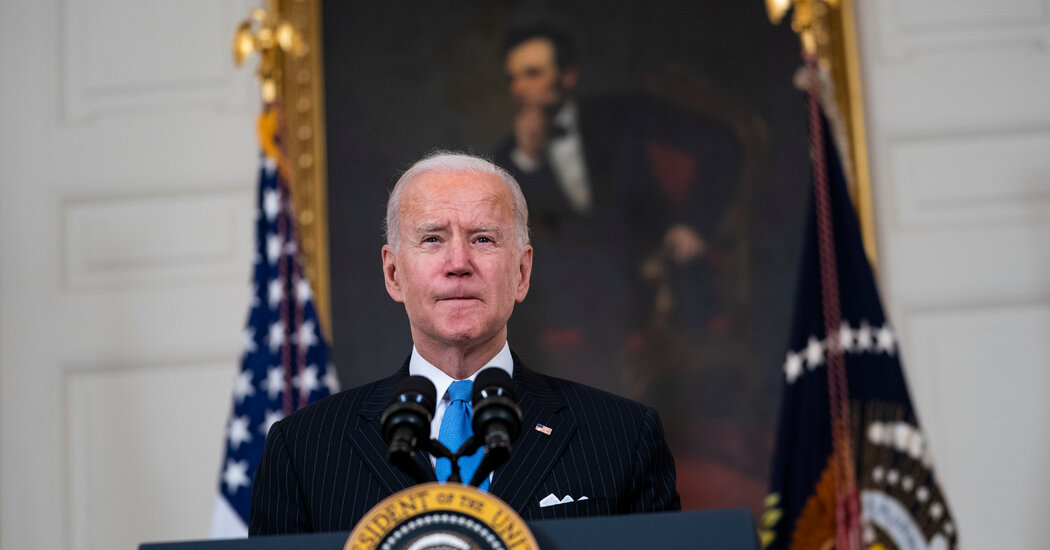 A Welcome Logistical Challenge for States as More Vaccine Arrives

Why the Georgia G.O.P.’s Voting Rollbacks Would Hit Black...

France Hired McKinsey to Help in the Pandemic. Then Came...

Boulder Shooting: What We Know About the Victims

“Harry, Meghan and Archie will always be much loved family members,” Buckingham...

“We cannot continue the cycle of extending or expanding our military presence in...

Scientists Are Trying to Spot New Viruses Before They Cause...

Tie-up with Serum Institute of India key to mass production...

British-Swedish pharma giant AstraZeneca and US pharmaceutical major Novavax have...

By Annie Flanagan and Akasha Rabut NEW ORLEANS — The sunset streamed through the...

At first glance, the partisan battle over voting rights in Michigan appears similar...

Cuomo’s Family Is Said to Have Received Special Access...

U.S. to Partner With Japan, India and Australia on Vaccine...

The Justice Department on Friday also indicted six members of the far-right nationalist...

The findings should have been forwarded to the department’s legal adviser and the...